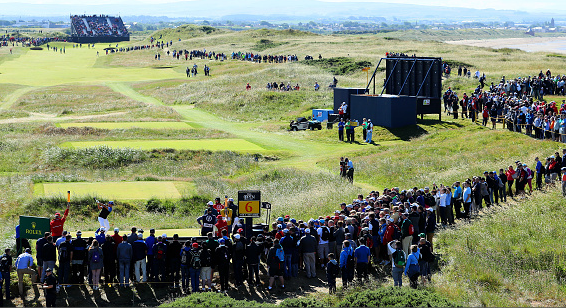 Last year at St. Andrews, players had to deal with rain delay as well as a suspension of play due to high winds. This year is no different.

Today, players will face the calmest and quietest conditions for the week. But it gets interesting from then on with high winds and some rain. It’s the British Open, what else do you expect.

Troon is a classic Out and Back Scottish-Links Layout. The front nine is shorter and predominantly plays downwind. The back nine is longer and plays into the wind. Royal Troon is a tale of two nines.

Martin Kaymer recently said, “It’s like a completely different golf course from the front nine to the back nine.” Luck of the draw will once again play a crucial role, it always does at this championship. But another big factor this week will be what lies ahead of the players when the conditions deteriorate. Are they just heading out or are they heading back in? How many holes do they still have to play?

Take a look at how the last two champions played the different nines at Royal Troon. Justin Leonard and Todd Hamilton were a combined 19-under on the front yet only 3-under on the back.

The 3 Keys to Success to Win at Royal Troon

Just like Oakmont, driving it long and straight will get a lot of the job done around this track. Troon isn’t lengthy by any standard but the back-nine does have a few lengthy par 4’s to tackle. Positioning off-the-tee will be essential this week.
Top Players This Week: Rory McIlroy, Dustin Johnson and Bubba Watson.

The greens at Troon are relatively flatter and quite boring. On top of that, due to windy conditions, the R&A has always had a conservative approach when it comes to green speeds. Considering this, even the poor putters stand a good chance to get in some good scores.
Top Players This Week: Colt Knost, Phil Mickelson and Kevin Kisner.

The Par-4’s at Troon offer a variety of flavour. The front nine has three Par-4’s which aren’t even 400 yards, while on the back there are four Par-4’s which are longer than 450 yards. As such, it will be key this week to take advantage of the shorter Par-4’s and avoid big scores on the longer ones.
Top Players This Week: Dustin Johnson, Rickie Fowler and Jordan Spieth.