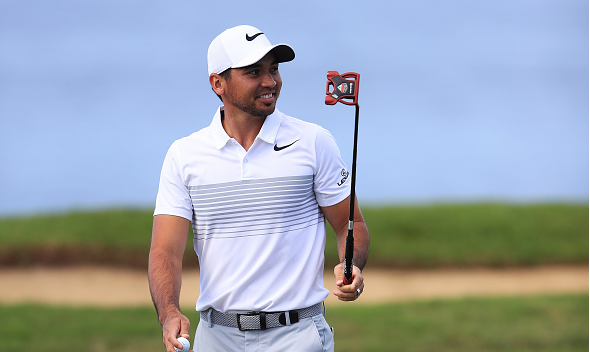 Jason Day is back in action after a long off-season of rehabbing (and signing a multi-million dollar deal with Nike Golf). The world #1 appears to be in fine form, posting two solid opening rounds of 70 and 69, good enough for a T11 spot heading into the weekend – only 5 shots off the lead.

After his second round, the 29-year-old Aussie sat down with the media for some questions.

Here’s the transcript of 5 questions.

1. You burned so many edges today with the flat stick. The 4-under could have been maybe 8, maybe 9. What do you think?

DAY: Yeah, I think it was close to that. I can’t do much better right now. Obviously I hit a lot of good putts. I think I’ve got to go try and work some stuff out on the range and hopefully get closer to the pin so I don’t have to burn so many edges tomorrow.

2. How are you holding up? You haven’t played for a long time. You worked on your back and said you’re in good shape. This is no picnic to walk this place. How is the stamina? How do you feel after 36?

DAY: I feel good. Taking three months off is a long time. I rode a lot on the bike right before I came, so I made sure that my fitness level was up. I feel good with how my back is holding up and the rest of the stuff. Hoping for a good weekend.

It’s obviously excited, we get to go early tomorrow and get more chill time at the pool hopefully tomorrow.

3. You mentioned the putting there. I think there were maybe seven or eight, or even nine, inside ten feet today that just didn’t go for you today. It’s unlike you. It happened, but it’s unlike you.

DAY: I think I’m focusing too much on where I’m aiming instead of trying to hole the putt. You know, if you take — in consideration, you take three months off, and not really knowing where you’re aiming and trying to get the speed right, because obviously here — I like putting on faster greens. And don’t get me wrong, going downhill, downgrain, they can be quick. But going uphill into the grain, they can be 10, if not slower.

So I burnt a lot of edges. I feel like I’m doing a good job out there. I’ve just got to keep trying to hole the putts.

4. Does 69 still give you confidence going into tomorrow?

DAY: It does. Obviously playing with Patrick today, felt like I got lapped. But I actually played some decent golf out there.

Like he said, I burned a lot of edges. I just have to keep giving myself the opportunities. Obviously it’s there. Even though I have taken the time off, it’s there for the taking; if I can take those opportunities. You know, it all happens on the weekend. I should give it a good run. I feel good about my game.

5. You had that super low one a few years ago, so you know it’s in there.

DAY: Yeah, if we have good weather like this over the next two days, obviously it could yield a lot of birdies out here; get yourself in good position off the tee and you get your wedges dialed in. Because there are even those courses, kind of long in a sense. You can have a lot of short clubs coming into the greens and if get yourself on the right side of the hole straight uphill into the grain, you can be aggressive at it and try and hole as many as you can.