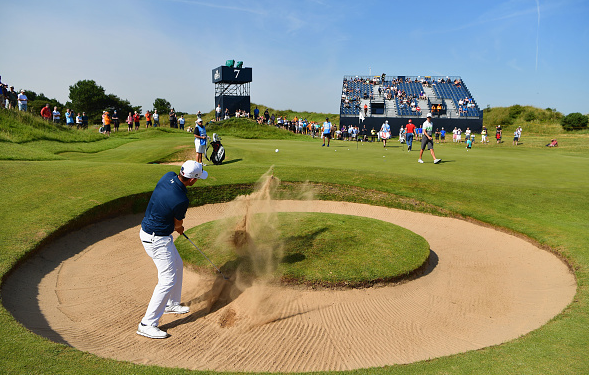 In an earlier post, we ranked the big-name favorites for the 146th Open Championship. To complement that piece, in this space, we’re going to rank some of the more under-the-radar players, or what we’re referring to as sleeper picks.

With that said, here are my top 9 sleeper options for this year’s Open Championship at Royal Birkdale.

For the purposes of these rankings, a “sleeper” is defined as a golfer whose odds are 100-1 or higher.

Kim is a landslide #1 this year at making the heads of statisticians hurt. For 90% of the year, he has been really, really bad. He has either missed the cut or withdrawn in 15 of 24 events. He is hitting few fairways and even fewer greens.

His abysmal 72.6 scoring average ranks 197th (out of 201 golfers) on Tour, and he has been a nightmare on the greens, particularly from inside 15 feet. He somehow only makes 66.7% on five-foot putts, which shouldn’t be possible at this level of the profession. He misses putts that I would concede to the 30-handicappers I face at $20-for-18-rounds-and-a-cart type local courses.

Yet, this same man won THE PLAYERS Championship in May, an elite tournament with a field analogous to the majors, and he contended for four days at the U.S. Open last month. That is an unbelievable discrepancy between big events and standard tournaments. I do not know how he does it; I just know that he does it.

If you want to bet on him, just make the bet and do not try to logically reason it. It can’t be done. For example, don’t ruminate on the fact that this will be Kim’s Open debut, and that in the past 42 years, only one man has won the Open on his first try (Ben Curtis in 2003). Just drop the money and hope for the best.

Put tersely, Royal Birkdale is a shot-makers course, and the 40-year-old Dufner is the quintessential shot maker. In 2012 and 2013, Dufner was among the best players on Tour, winning three times, including the 2013 PGA Championship, and tallying 14 top-10s.

His form then slipped for a few years, but is unequivocally on the way back. He has been competitive in a lot of 2017 events, and won The Memorial Tournament last month, one of the toughest non-majors on Tour.

Dufner is as calm and collected as they come, and is a former major champion. It is not often that someone with that profile has odds in the triple-digits.

He took down Tommy Fleetwood in a playoff to win Shenzhen International, the best result among the 10 top-25s he has on the season, a season in which he has risen to #29 in the world rankings.

Wiesberger’s Open record is poor and he is not a great putter, but he has put a lot together this year, has been in the mix at a major before, and possesses the ball-striking prowess to contend at Royal Birkdale.

The 42-year-old Dane is a scrappy vet who has become a regular on the major leaderboards in early rounds. He is a short hitter, but his low ball flight should mitigate a bit of that problem, and he is one of the best putters in the world.

Kjeldsen finished in the top 10 of two majors last year, and more recently was a surprise T5 at the WGC-Dell Technologies Match Play.

If the rain really gets going and this tournament turns into a long, exhausting trek, Kjeldsen stands an above-average chance of becoming professional golf’s next first-time major winner. He would fit in well with some of the 40+s that have taken The Open in recent years.

‘Beef’ is too likeable to view objectively, but this still feels like it could be a good value pick. I don’t think it is the golf version of getting lost in someone’s eyes. He was among the best in last year’s Open Championship field not named Henrik or Phil.

He played in the penultimate pairing on Sunday, and finished in solo-eighth place. His results have been a disappointment this season in regards to what was expected from him, but he is trending positively as of late, with three top-25 finishes in his last five events.

He possesses some good traits for Royale Birkdale: he drives the ball very well, he hits a good percentage of his greens, he has a relaxed demeanor, and he is conversant with links-style golf. There is also the home crowd factor with ‘Beef’, which should be as behind him as they are behind anyone in this tournament.

The man one spot ahead of ‘Beef’ Johnston in these rankings is the man he was paired with last year on Sunday in the second-to-last group.

Haas’ results in majors just have not been there, but his odds are still surprisingly low given that he is well-established and well-recognized as a consistent week-in, week-out threat.

Haas has been his usual self in 2017, with 11 top-25s in 18 events and few missed cuts. He finished third at the WGC-Dell Technologies Match Play and was T5 at the U.S. Open, where he reached -10 and broke 70 in his final three rounds.

Being 9th on Tour in scoring average and 10th in greens in regulation percentage are also excellent signs for his chances at Royal Birkdale.

Hatton has reached as high as 14th in the world as recently as March, and even at #24 now, picking him as a “sleeper” kind of feels like cheating, but that is the reality of having missed four straight cuts coming into the week.

Momentum is important in golf, and Hatton’s lack of it has caused his odds to balloon into triple-digits.

It is tough to ignore a streak like that, and I am not suggesting that anyone should pretend it didn’t happen, but there is an awful lot to like about him as well.

The 25-year-old Englishman is only a few months removed from being touted as one of Europe’s rising stars. He drives well, he hits a lot of greens, and statistically, he is the best putter on the PGA Tour.

He also finished T5 at last year’s Open Championship before adding another top 10 at the PGA Championship. He has a number of high finishes on the current year, and he is the defending champion of the Alfred Dunhill Links Championship, a European Tour event very similar in style to The Open.

Few doubt that Hatton will get back on his upward career trajectory soon. At 100-1 odds, this could be the epitome of buying low.

No offense to Padraig Harrington, who seems like a genuinely good guy and was a worthy winner at Royale Birkdale in 2008, but the fact that Molinari’s odds are nearly double Harrington’s is absolutely mind-boggling.

The 34-year-old Italian has yet to add a fifth career European Tour victory this season, but came close recently when he finished runner-up at the BMW PGA Championship, and also added top 10s in the U.S. at the Arnold Palmer Invitational and THE PLAYERS Championship.

Over the past 12 months, he has been a top-20 machine on both the U.S. and European Tours.

In terms of overall fit, there are few in the field better equipped to take this Open.

At 24 years and 10 months of age, Grillo would have to buck recent history to win this week at Royal Birkdale, as he would be the youngest Open winner since Seve Ballesteros in 1979, but Grillo has made an early career of defying the odds: winning his first PGA tournament as a professional, more than holding his own in the majors, and playing phenomenally in his first FedEx Cup playoffs.

His game is a tremendous fit for an Open Championship: he is low and straight off the tees, a solid putter, and a budding star as a ball-striker.

While Grillo has yet to seriously contend at a major, he has shown a high level of comfort in them, finishing T17 or better in three of the four in 2016. A Grillo win would be an incredible tribute to the recently passed Roberto de Vicenzo, an Argentine legend and the winner of the 1967 Open Championship. He has looked on the verge of breaking out on the biggest stage; don’t be surprised if that coronation happens this week.