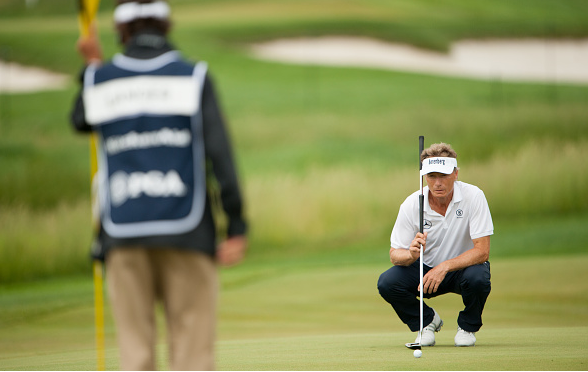 For a guy who now has nine Champions Tour major victories, Bernhard Langer cannot seem to catch a break lately.

Earlier this week, Gary Player questioned the validity of Langer’s Champions Tour record for career majors, believing that he and Langer should be co-record holders.

The remarks came in the midst of championship #9, which occurred this past weekend at the Senior PGA Championship.

Now, according to Hank Haney, there have been questions by fellow Tour members about how legal Langer’s putting stroke is.

Just out of curiosity, is this legal @USGA? What exactly is anchoring? Lots of Champions Tour players are questioning this. pic.twitter.com/eG6XmSkJFI

“I am aware of my left arm and hand, and my hand is definitely not touching my body. I anchor when I address and then move my hand away from the chest, till it is not touching anymore.”
–Bernhard Langer, in a 2016 text message to Golf World’s Tim Rosaforte