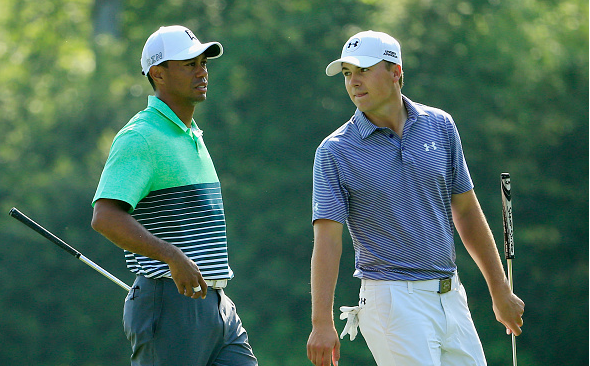 Tiger Woods revealed, via Twitter, earlier in the week that he is now receiving professional help for his pain medication management.

The 14-time major winner has been dealing with back pain for years, pain which has led to him making just a small handful of starts on the PGA Tour over the past 24 months.

During press conferences at TPC River Highlands, in advance of the Travelers Championship, Jim Furyk, Rory McIlroy and Jordan Spieth were asked to comment on Tiger’s ordeal.

Press: I’m just wondering, Tiger tweeted out that he was seeking professional help for some of the things going on in his life. What are your thoughts on what’s going on with him?

Furyk: I haven’t spoken to Tiger since, so it’s hard to really know exactly what’s going on. Surely, unfortunately, I saw that video like everyone else. I got the news. I think everyone rushes to a judgment of what they think may have happened.

But, first and foremost, I want Tiger to be happy. I want him to be healthy. Golf is, as we get older in this game, golf is so far down the list on what’s totally important in life. You want your health first.

You want to be a happy person. He’s got two beautiful kids. I wish him the best. I want him to be happy and healthy first. If he has an opportunity in the future to come back and play the game and play it competitively, great. If not, he accomplished pretty much more than anyone in the history of the game did anyway.

So, first and foremost, I think a lot of us that know Tiger, that have played alongside him a bunch, surely he was a huge help at the Ryder Cup last year. Those folks have some bonds with him. I think everyone’s pulling for him and rooting for him and hoping that he gets healthy. That could be bad, that could be the physical injuries, but also if he does have an issue with the pain medication, again, I don’t know. Hopefully he gets that settled as well.

Press: Tiger this week tweeted he was getting professional help for some of his off the field problems. Any thoughts on what he’s going through right now?

McIlroy: Yeah, it’s tough. Look, it’s a tough one. I mean, I reached out to him whenever everything broke a few weeks ago and just making sure he was OK. I felt I built up a good relationship with Tiger over the last few years.

He’s okay. He’s gone through a rough time the last few years with injuries and being in pain and not being able to sleep. I totally understand how that can happen. So it’s good that he’s getting help. It’s good that he’s on the road to recovery, I guess. I guess everyone in golf and around the world just wishes him the best.

That’s really the thing that he feels more than anything else. He’s felt an outpouring of love over the past few weeks after all this happened, and he really appreciates that. Hopefully forget the golf for a minute, and go back to being able to lead a normal life, raise his kids and have good times doing that.