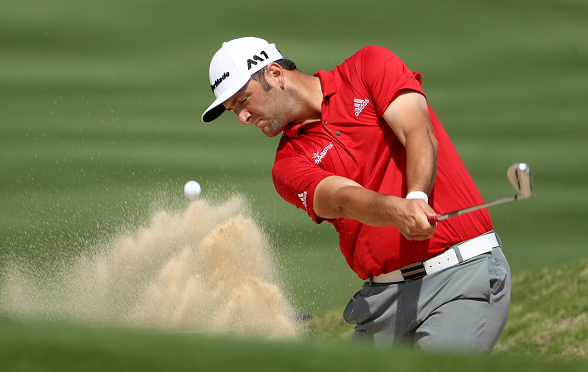 The Championship match is set and it will be the Rookie, Jon Rahm (21), competing against the number one player in the world, Dustin Johnson(1).

If Rahm were to win this championship match, he would move up to #10 in the world and become the fourth fastest player to reach the top-10 since turning professional (39 weeks).

This match has the potential to be one of the best matches since the Patrick Reed vs Rory McIlroy Ryder Cup match.

Lets take a dive deeper into the match and predict a winner.

Rahm has climbed the world ranks quickly, and his win at the Farmers Insurance Open, earlier this year, helped him get into the Masters, and pick up his first PGA Tour victory. Rahm is currently running away with the Rookie of The Year award.

Coming off wins in his last two events, Dustin Johnson came into this week with an unbeatable game. Johnson racked up wins at the Genesis Open and the WGC-Mexico Championship. Johnson currently sits at 3rd in the FedEx Cup and is a mile ahead of the pack in the OWGR.

Despite struggling to put away Alex Noren and Hideto Tanihara, Johnson has advanced to the final match and will be playing for his 3rd straight win. Johnson also beat Webb Simpson, Martin Kaymer, Jimmy Walker and Zach Johnson along the way.

This will be one of the best matches of this week, and could possibly see playoff holes. Both Johnson and Rahm are fierce competitors, and I see them playing all way through 18.

I’m going to go with the youngster here. Rahm has been on fire this week and I don’t see that changing. Rahm 1-up.

The good news for Tanihara is that he will be in Augusta in two weeks for the Masters! Pretty good prize (and the cash) for a fourth place finish.