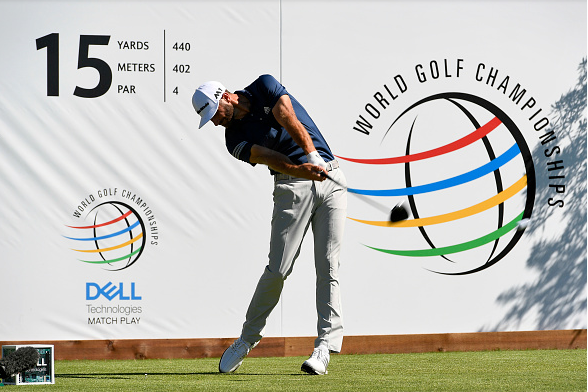 An exciting day of match play in Austin has whittled down a field of 64 of the world’s best down to a final four at the WGC-Dell Technologies Match Play.

Those four make up an intriguing bunch: the recently-unstoppable world #1; a 22-year-old Spanish wunderkind; a former FedEx Cup winner and son of a Tour great; and a complete unknown from Japan.

Tomorrow, the final four will face off to determine who is the king of the head-to-head format.

The thing that stood out most in the Round of 16 was how dominant the winners were in their matches. Of the eight matches, only the Fisher-Watson match finished with both players having at least one lead, and only the Haas-Na match reached 18 holes.

Dustin Johnson obliterated two-time major champion Zach Johnson the same way he cruised through pool play: by getting ahead early. DJ won the first hole, and reached 4-up by the turn. It was the fourth straight match he won the first hole and as a result, has lead after each hole he has played this week, an unfathomable feat in this format with this caliber of competition.

Possibly the only player hotter than DJ at this point was Phil Mickelson. The 46-year-old had been so dominant in his first three matches, that he had not even played past hole #14. He reached the 15th hole in the round of 16, but did not need more than that, cooling off off Marc Leishman, the rejuvenated Aussie who won the Arnold Palmer Invitational last weekend.

How the Winners Got There

To the dismay of the crowd, the quarter-finals saw the end of the incredible run of fan favorite Phil Mickelson.

Phil played well, but Haas delivered a powerful early-blow with birdies on four of the first six holes, and then reached three-up by the turn. Mickelson won two of the first three on the back nine, but was not able to get closer than 1-down. The five holes Haas won on the front nine were just too much.

Rahm was even more impressive than Haas, obliterating Kjeldsen in a 13-hole match where the Dane did not win a single hole. Haas and Rahm will face off in the first of tomorrow’s two semifinal matches.

Tanihara showed that his first round upset of Jordan Spieth was no fluke, taking down Fisher by winning holes 6, 7, 8, and 9 to go 4-up at the turn.

In the only matchup of top-10 seeded players this week, Dustin Johnson again took off at the start, winning holes 1, 2, and 3 to eliminate Noren. DJ was actually temporarily subdued in this one, as Noren squared the match by the 12th hole, but DJ threw the final punch with birides on three of the last four holes. DJ will face Tanihara in the other semifinal match.

Both Rahm and Tanihara are playing in their first WGC-Match Play, while DJ and Haas have already passed their previous bests in this tournament.

“Extremely. I can’t describe when was the last time I played a round, actually I can, the back nine on Torrey Pines was pretty damn good, but I would say since then I haven’t played 13 holes like I played today, maybe ever. I was telling you earlier, I I‘ve missed one single shot, and that was the second shot on 9, and missed just right of the green, besides that every single other shot I’ve hit it was exactly the way I wanted. To play golf like that and make a few putts, it was just a perfect round.”
-Jon Rahm following his quarterfinals match