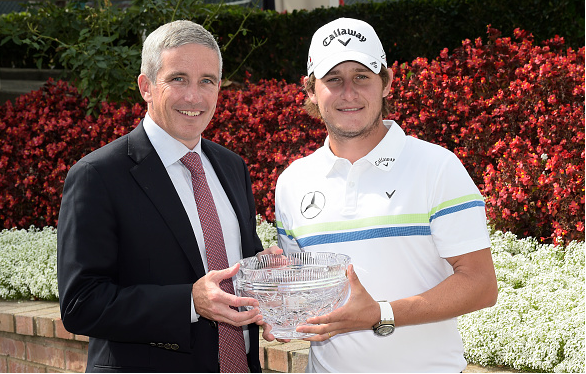 Emiliano Grillo was named the PGA Tour’s Rookie of the Year for the 2015-16 season. The young Argentinian is the defending champion at Silverado, so it was only fitting that he was presented with the award at the Safeway Open.

The following is a transcript of the presentation.

JAY MONAHAN (Deputy PGA Tour Commissioner): Good afternoon, everyone. It is a great thrill to be here at the Silverado Resort & Spa to kick off the 2016-2017 PGA Tour season. I want to start off by saying a special thank you Safeway, our title sponsor, and to officially and formally welcome them to the PGA Tour family.

I am thrilled to announce that Emiliano Grillo has received the 2016 PGA Tour Rookie of the Year Award.

Emiliano had a phenomenal season. If you look back to what happened this past year, he is the third player from the high school class of 2011 to win this award; Jordan Spieth in 2013 and Daniel Berger in 2015. He’s also the third player from Latin America to receive this award. Carlos Franco received it in 1999 and Andres Romero received it in 2008. And his success actually
started the week before as he concluded a very successful Web.com Tour finals, and as a Web.com Tour graduate he came here to Silverado in his first PGA Tour event, he won.

He becomes the eighth player in the history of the PGA Tour to win their first PGA Tour event. And his great work didn’t stop here. Over the course of the season, I think if you look to his final standings, he was 11th in the FedExCup standings as he left Atlanta, he finished very strong, had an eighth place finish at the Olympic games and two top-10 finishes in the FedExCup Playoffs.

EMILIANO GRILLO: First, thank you. That was really nice. Like you say, it feels like a long time ago. It’s been a nice ride. It’s been a long year. It was definitely worth it. It’s nice being back here where it all started.

DOUG MILNE (PGA TOUR COMMUNICATIONS DIRECTOR): As part of the celebration, we asked Emiliano what he enjoys eating, and as part of the celebration the Silverado staff has created lomitos for his request and we would like to bring one of them up. We have created a lot of them, so feel free right here in the back to treat yourself to lomitos. At this time, we would present you with one and then we’ll get started with the press conference. We will continue on. Not only do we have the 2015-16 PGA Tour Rookie of the Year but we’ve also got the defending champion of the Safeway Open here with us. With that said, it’s been an incredible year. You touched on it, but if we could just get some comments on being back here at Silverado as you defend your title.

EMILIANO GRILLO: When I got here on Monday, I can remember why I fell in love with this place. It’s unbelievable. The golf course looks greener than last year, it’s in great shape just like last year but it looks better to the eye. Hopefully the rain that’s coming will stay away and we have some good week of golf. Hopefully I can get back my trophy.

PRESS QUESTION: Obviously you had immediate success out here on Tour and we’ve seen some other younger players have similar success, Jon Rahm comes to mind. Seems like with the young crop of players now, yourself included, you don’t really seem to have a learning curve. What is it about this young group that kind of plays with no fear and just kind of comes out here and feels like they can win?

EMILIANO GRILLO: I think the process in the last 10 years have changed for young people. We got a TV, we got our phones, we can look everything on the phones and on the TV. That kind of speed up the process. If you ask me why we come here fearless, it’s because we want to win, we want to do what this.

All guys, whatever, I mean they’re 30 years old. You want to do what these guys do. I think we want it so much that we just, we put that fear aside. I personally take that fear as something that helps me, that drives me, motivates me. At the beginning I thought that fear
was something negative and now I think it’s a positive and that kind of helps. Like last year, I think that’s what helped me to get that trophy back home.

PRESS QUESTION: If you had to rank what happened this season, obviously winning here, playing well in the Olympics, making it to the TOUR Championship, how would you put those accomplishments along with the Rookie of the Year trophy?

EMILIANO GRILLO: Well, like I say, this is a year-long trophy. This is up there definitely. This is probably the top one because you only get one chance, you only get one chance of getting Rookie of the Year and I think I’m lucky enough to do this for a living and work really hard for it. This is definitely first or second. That win last year was something that proved to me I belong here, that I could win out here. That was something that it’s hard to earn, it’s hard to get that in your mind. Quite different, but definitely up there both.

PRESS QUESTION: Since you never know how golf is going to turn out, what do you think or does it seem odd to you at all that having grown up playing with Smylie and Jordan and Berger that you guys would all be Rookie of the Year so close together?

EMILIANO GRILLO: I mean, I always knew that some of us was going to get there, either Jordan or Justin, Daniel, Patrick Rodgers, all these now playing out here on the Tour. I mean it was a matter of time. That group was so competitive. It was hard winning junior events, it was really hard. Everybody was shooting 10-under par, 8-under par on really difficult golf courses. I think that, at least I think that that got me ready. I mean, I was playing with the best juniors in the world. I was playing with guys that were very hard to beat. You know, when you’re 14, 15 years old like that, it kind of gets you ready very quickly.

PRESS QUESTION: Didn’t Jordan say that no one hit the ball better than you?

PRESS QUESTION: What’s your plan for the rest of the year?

EMILIANO GRILLO: Thank you very much.