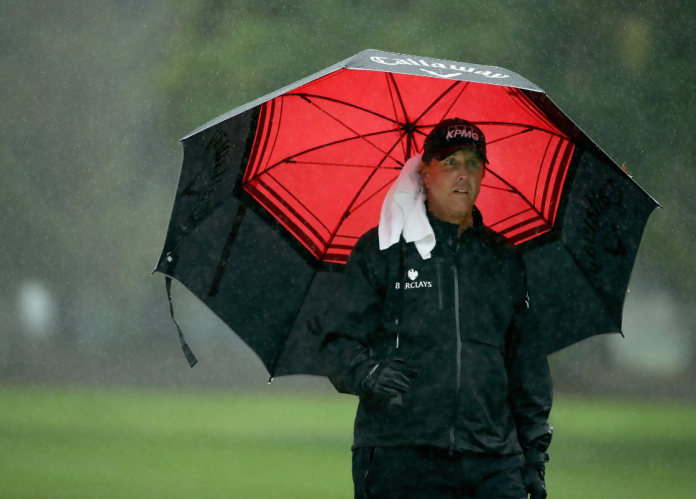 There is no Tour player who enjoys the challenges of playing golf under duress more than Phil Mickelson.

Wearing his signature double gloves, Mickelson fired another 3-under par 69, while taking on all that mother nature and the golf gods threw at him.

Phil Mickelson is off.

Whether it was playing his ball out of a lie in the front of a concession stand.

Don't try this at home. https://t.co/6JTNYu1Zms

Or simply managing recovery shots in a downpour, Mickelson always seems to thrive.

Phil's got these recovery shots down pat. https://t.co/gt9xIFjsqu

Phil hit his first drive OB, but nearly flew his fourth shot in the hole. https://t.co/ouQ6EOVfU6

Afterwards, Mickelson said it was one of his better rounds in terms of iron play, given the lousy conditions. That’s saying something for a player who’s won 42 times on the Tour.

"I think this is some of the best iron play that I've had."

Phil Mickelson impressed himself during a wet Friday at the Safeway Open. pic.twitter.com/P24o1coILL

And we couldn’t agree more!

The signature thumbs up. ? pic.twitter.com/fez4oOyijR

Mickelson stands at 6-under for the tournament through two rounds. He is tied for 10th place at the time of this posting.