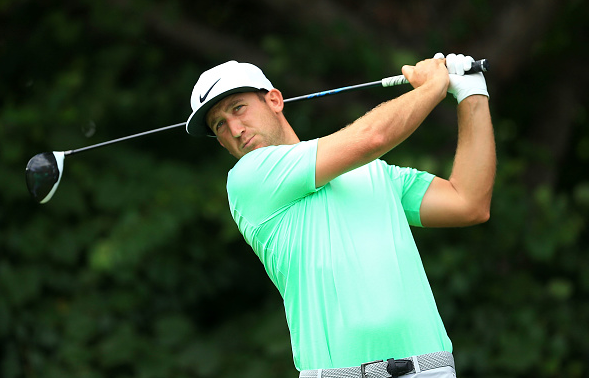 After a rain-delayed opening-round of the RBC Canadian Open, nearly one third of the 156-player field at Glen Abbey are within three shots of the lead.

At the top is a group of five which includes Kevin Chappell, Hudson Swafford, Matt Every, Brandon Hagy and Ollie Schniederjans. The five leaders are at 7-under 65, while 47 others are within three shots.

Every, who has fallen to No. 929 in the world rankings, finished with the only bogey-free round of the five, while Chappell and Schniederjans each had a pair eagles on their way to 7-under.

Eleven more players are tied for sixth at 6-under, headlined by defending champion Jhonattan Vegas, Vijay Singh, who won at Glen Abbey in 2004, and two-time Masters champ Bubba Watson.

Watson, who finished with his first bogey-free round of the season, says he’s trying to tune-up his game for the playoffs.

“I got out of position with my swing over the last, man, probably about a year. You know, who knows why. Maybe because of losing weight,” said Watson, who is winless on the season. “But that’s why I wanted to play so many round. That’s why I wanted to play six tournaments in a row so I can keep building on it and try to get better for the Playoffs.”

World No. 1 Dustin Johnson, and Englishman Ian Poulter headline a group of 16 players at 5-under 67.

Mackenzie Hughes, also at 67, is the top Canadian.

“If you hit it in the fairway, you can be aggressive,” Hughes said. “The few fairways I missed, I was just trying to make par and you have to be a little bit defensive. All in all it was a great day.”

Matt Kuchar fought off some dizzy spells to post a 1-under 71. The British Open runner-up was cruising along at 4-under through 11 holes, but struggled over his final eight holes to finish at 71.

“I had a couple of spells where I got a little bit of dizzy and I feel weak,” Kuchar said. “I don’t know where it came from. I’ve had plenty of time to get over the travel. Hopefully, it’s just something that passes real quick.”

Fourteen players were unable to finish.

“Well, I’m good. I didn’t plan on sucking the rest of my life when I went into a slump. So I can’t look other guys in the eye out here and be like, that guy’s going to be better than me the rest of my life. There’s just no way. Some of them I can. About 95 percent, I can’t.”
Matt Every, World No. 929, Co-Leader