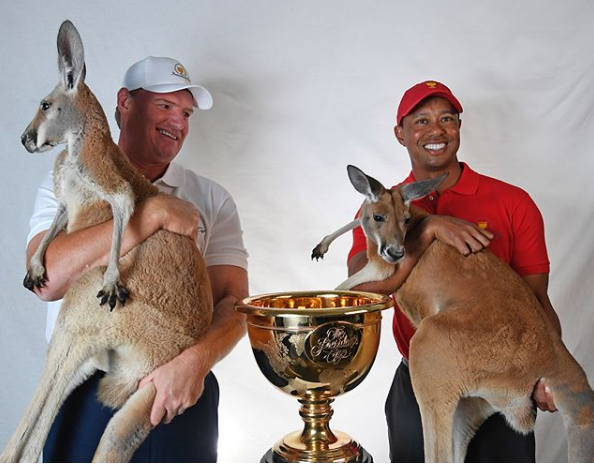 Yesterday at Bay Hill, Tiger Woods and Ernie Els were introduced as the Presidents Cup captains for the 2019 matches in Melbourne Australia.

According to Woods, the idea of his captaincy first was suggested via texts with the current rotation of Ryder Cup/Presidents Cup skippers, and then through a phone call he made to PGA Tour Commissioner Jay Monahan where the 79-time Tour winner (uniquely) pitched himself for the job.

“It came about just through a group texted with Davis (Love III), Freddie (Couples), Jim (Furyk) and Steve (Stricker) and who we thought might be the next captain and they said that you would probably be on the short list,” said Woods.

“And I didn’t really think about it in that way. But then after a little bit of thought I said, you know what, that sounds like something I really want to do.

“I called Jay (Monahan) up said, ‘hey Jay, might you be interested in me possibly being the captain in 2019 Presidents Cup team?’ Silence. (Laughter.)

“And then he said, ‘yeah, I think that might, we might be able to work that out.’