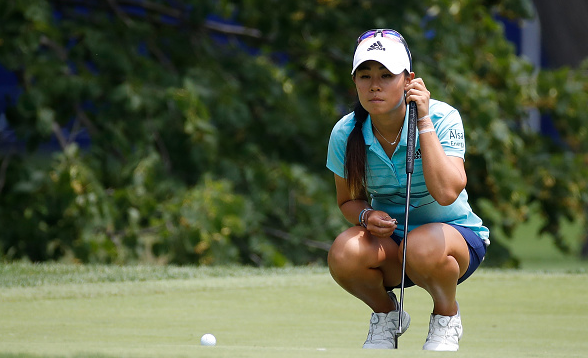 Danielle Kang, the co-leader after two rounds, birded the 18th hole on Saturday to grab a share of the lead heading into Sunday’s final round of the KPMG Women’s PGA Championship

Kang and Choi will be Sunday’s final pairing at Olympia Fields.

Jiyai Shin had the low round of the day, a 7-under 64, and moved into solo-third at 8-under.

Defending champion Brooke Henderson posted a 2-under 69 and is alone in fourth at 7-under. First round co-leader, Amy Yang (70), and second round co-leader, Sei Young Kim (72), are tied for fifth at 6-under.

The final round will be broadcast live on NBC from 3-6 PM (ET).

.@TheChellaChoi goes bogey-free for round 3!

“I love the vibe of a major. It makes you feel so blessed to be out here. But as a tournament, when I step up and hit a shot, it’s the same thing as if I’m on the driving range. I do what I have to do and stick to my routine and play my game.”
–Danielle Kang

“I feel very good right now. My shot and my putting, very good the last couple of weeks so I have confidence. You know, it’s a major tournament. It’s very biggest for me, but I’m ready for the final round. I practiced a lot and training a lot, and mental training, too.”
–Chella Choi