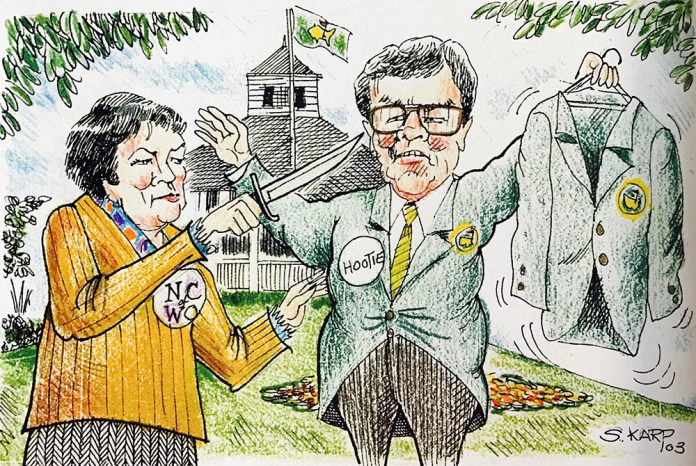 With the recent news about the passing of Hootie Johnson, the former Chairman of the Masters, we thought it would be interesting to republish a column from way back in 2003, written by Pro Golf Weekly’s publisher, Paul Daly.

The piece, simply titled, ‘Dear Martha Burk,’ appeared in the Spring 2003 issue of GolfBoston Travel & Leisure, a quarterly New England-based golf and travel magazine, of which Daly was its editor.

The article is published below, exactly as it appeared in print, more than 14 years ago, sans the images and links.

My first question is this: Are you for real?

Your organization’s stated mission, listed on your website, is to “work on a broad spectrum of issues including equal employment opportunity, economic equity and development, education and job training, reproductive health, as well as the specific concerns of mid-life and older women, girls, and young women, women of color, religious women, business and professional women, homemakers, and retired women.”

No where does it mention getting a token rich female accepted as a member of Augusta National Golf Club.

Where are you really going with this Augusta thing? What is the benefit sought via the time invested, and resources allocated, by your supposed female-crusading organization?

Yes, eventually some rich female executive from an IBM or a Microsoft will be admitted. And when she takes the first tee shot, what good will have come of it?

Other than a notch in your “bayonet,” a couple of high-fives in the editorial offices of the New York Times, and a new job for Christine Brennan of USA Today, not much as I see it.

Does working so tirelessly to get a millionaire CEO accepted into a private golf club help minority females secure equal educational opportunities? Does it benefit middle class working mothers? What about teen pregnancy?

The answers are no, no, and no.

And you and your organization should be ashamed. This campaign is driven purely by an egotistical agenda. It in no way advances the issues listed on your website.

And your modus operandi certainly isn’t winning over any supporters either. Especially since you’ve decided to go the Jesse Jackson-route of threats and shakedowns.

With assistance from the media (i.e. New York Times, USA Today), you have implemented a disgraceful and shameful campaign, designed to threaten, intimidate, and bully any person, company, or organization that may not agree with your nonsensical stance.

But a word of advice: Americans do not like bullies. And you, Ms. Burk, are a bully.

Sure, you will eventually pop the cork and sip a glass (or two) of champagne when the private entity known as Augusta National Golf Club succumbs to your mob-like threats and intimidation. And you may send the New York Times a couple of thank you cards. But like all bullies, you will pay in the end.

Because when all is said and done, long after the first female CEO charters in and out of Augusta on her private jet, the NCWO will have zero credibility remaining relative to the advancement of women’s rights.

Your legacy will simply be the ‘Bully of Augusta.’

In closing, on behalf of golf fans everywhere, men and women, I want to thank you from the bottom of my FootJoys.

Because, while this silly campaign will have produced zero in collateral benefit for inner city girls, female athletes, or single mothers, it certainly will be a boon for golf fans everywhere.

It’s pretty tough to beat a commercial-free Masters tournament. One that I will enjoy with my wife and three daughters.

EA Sports To Launch ‘PGA Tour: Road to the Masters’