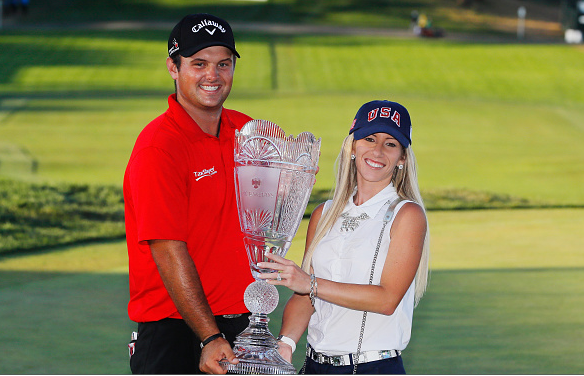 All season, Patrick Reed has been either the leader or among the leaders in top 10 finishes, but has not been able to seal the deal. That all changed during the final round of The Barclays, where Reed started two strokes behind Rickie Fowler, but left with the victory – his first of the season, fifth of career, and fourth consecutive season with a win.

In a final round that had no shortage of storylines, Reed’s 70 did not just win the tournament, but it also moved him to #1 on the FedEx Cup Standings, and secured his position on the American Ryder Cup Team. Reed won by a single stroke over Sean O’Hair and Emiliano Grillo.

How Reed Did It

Patrick Reed may have won by just a single stroke, but neither O’Hair nor Grillo threatened him much, and the lead didn’t narrow until Reed tallied two bogeys on the last three holes while protecting the lead. Rickie Fowler was Reed’s biggest competition all day, but Fowler imploded down the stretch, while Reed did just enough.

Reed caught Fowler after a birdie on #7, his third birdie in a four hole span. By the 11th, Reed had captured solo lead, and would not give it up.

What This Means for Reed

This win is enormous for Reed. He vaults to #1 on the FedEx Cup standings, putting him in the driver’s seat for the $10 million prize awarded after the Tour Championship. It also moved him up to 7th in the Ryder Cup standings, with the top 8 qualifying automatically after today.

Winning at possibly the toughest course on tour should also be a huge confidence booster. He is now the man to beat in these playoffs.

Rickie Fowler came into this tournament in 12th place on the Ryder Cup standings, putting him on the outside looking in. However, he played a brilliant first three rounds; and was the 54-hole leader after notching just one bogey through three rounds.

It looked like Fowler was a lock to get the final spot that became more gettable when Zach Johnson tumbled down the leaderboard earlier in the day.

Then the back nine happened, or more specifically 15 and 16 happened. Over that two hole stretch, Fowler went bogey, double bogey. After another bogey on 18, Fowler dropped all the way into a tie for 7th, and off the automatic Ryder Cup qualifying list altogether. He stands a good chance of being a Captain’s pick, but at the very least, he will be sweating it out over the next few weeks. With the loss, Fowler is now 0 for 4 converting 54-hole leads to wins.

Brooks Koepka had an awful final round to finish off an awful tournament showing, but even at T70, Koepka clinched the #5 spot in the Ryder Cup standings. Brandt Snedeker held onto the 6th spot, with Reed capturing the 7th, and Zach Johnson barely holding on at #8.

There are still four spots to be decided by American Captain Davis Love III. At 11th in the standings, Fowler will be in consideration along with Bubba Watson (9th), J.B. Holmes (10th), Matt Kuchar (12th), Jim Furyk (15th), and maybe even a few others.

“It’s awesome. I worked pretty hard with my coach the past couple weeks, and the game obviously shows that I’m moving in the right direction, but there are some things I need to work on. As the pressure starts building, I start to go back to my old patterns, but to come down here and finish up on the last, it’s just amazing, and I wouldn’t be able to do it without my team. My wife out here trekking around this place, Callaway fine tuning that driver this week, it has just been great. And I’m glad to be able to close this one off.”
–Barclays winner Patrick Reed