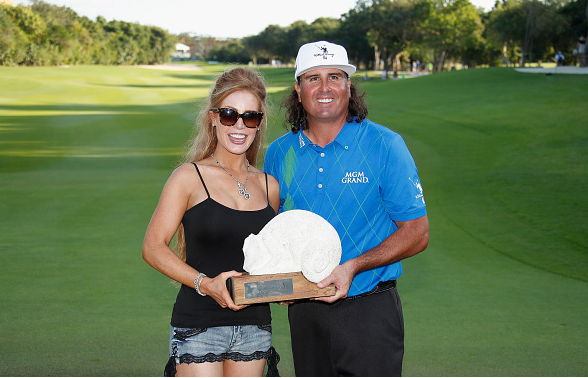 In recent years, Pat Perez has been relegated to the back of the minds of golf fans. He has one of those names you see, where you know that he has done good things on Tour, but can’t quite remember when.

Missing nearly all of the 2016 recovering from surgery, he was in danger of becoming completely irrelevant in the golf world, but he decided he was ready to get back into the spotlight.

With a four-under 67, at the OHL Classic at Mayakoba (Mexico) Perez took over the lead from 36 and 54-hole leader Gary Woodland, ending his seven-year victory drought. Perez took control early and was able to stay in cruise control long enough to fend off his competitors, winning by two strokes over Woodland, and three over Russell Knox.

How Perez Did It

For the second straight day, Perez came out of the gate very hot. In round 3, he played his front nine in 7-under, and while he did not do quite THAT good in round 4, he birdied five of his first eight to give him a cushion that nobody in the field was able to overcome.

Perez started the day one back of Woodland, but after birdies on 1 and 3, combined with bogeys for Woodland on 1 and 3, Perez did not need much time to get into the lead. He went into conservative mode on the back nine, with eight birdies and one bogey to win by two. Perez limited his mistakes, with just four bogeys for the entire tournament, one in each round.

What It Means For Perez

It’s a tremendous accomplishment for Perez, who has not been in contention for quite some time. He had surgery in early March, wiping out nearly his entire 2016 season, and he just recently came back, with a respectable T33 at the CIMB Classic in Malaysia, and then a T7 at last week’s Shriners Hospitals for Children Open.

John Peterson made some waves when he contended as a young gun at the 2012 U.S. Open, finishing T4, four strokes behind winner Webb Simpson. The sky seemed to be the limit, but his pro career had not quite gone as expected.

Since then, he has only one top 10 on tour, a T8 at the 2013 Zurich Classic and has struggled to get his Tour card. A T15 highlighted by a 64-68 could be a sign that he is ready to capitalize on his potential.

Graeme McDowell got his championship defense off to a terrible start, struggling to a four-over 75 and looking like a longshot to even make the cut. He was phenomenal from round 2 on shooting 65-65-68 to finish T24.

“Unfortunately, I was really calm all day. I’ve had this aggressive type attitude amongst things that I kinda thought for the last two weeks, and I just had a lot of confidence when I came back. I started about two and a half months ago. I didn’t think it would happen this fast. I thought I was going to be pretty successful in my comeback”.
–Pat Perez, OHL Classic Champion