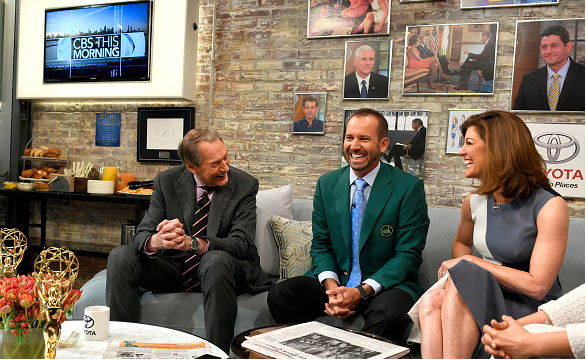 As is the ritual now, following a major championship, the winning golfer gets to bask in the glory by spending a couple of days in NYC doing a promotional tour for the sport.

This time it was Masters champion Sergio Garcia, wearing the iconic Green Jacket, who made the rounds in the Big Apple.

During day one in the city, Garcia made appearances at the NY Stock Exchange and the Empire State Building.

First it was to the floor of the Stock Exchange in time for the closing bell.

After posting for pictures and shaking hands, Sergio visited the set of the CNBC’s Closing Bell.

Sergio then stopped by Bloomberg LP, and signed an autograph for former NYC Mayor, Michael Bloomberg, the company’s founder.

Then it was off to a photo op at the Empire State Building.

After a night on the town, Sergio and his fiance, Angela Akins, woke up early and did the talk show circuit.

Then it was off to an appearance on CBS This Morning with Charlie Rose (no relation to Justin) and Norah O’Donnell.

Sergio then sat down for an interview with Vonnie Quinn of Bloomberg TV.

Sergio then traveled over to the offices of the Skimm and gave the girls some putting tips.

Sergio and Angela sat down for an interview with Access Hollywood.

Finally, it was off to an interview on Sirius XM Radio with Chris ‘Mad Dog’ Russo.