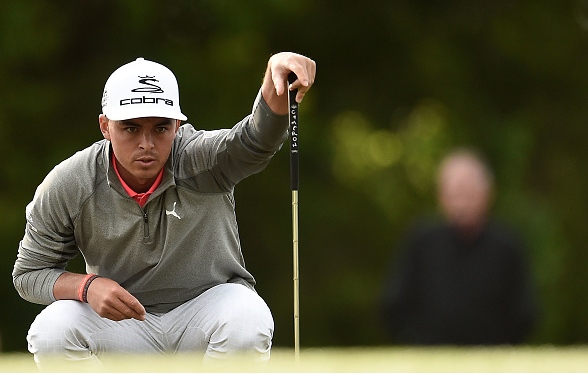 Rickie Fowler fired an opening round 64 and leads the Shell Houston Open at 8-under through 18 holes. The recent winner of the Honda Classic did a quick interview session with the golf media following play.

Here’s a transcript of the back and forth with Fowler – along with some photos by the fine folks at Getty Images.

QUESTION: Good start. Let’s start with No. 9, a tough par-3. I thought it was going in for a 1. Did you think it was that close?

FOWLER: It looked good. I may have caught it a groove low, but it was a shot I was trying to hit. We had 230 hole and no help. The wind was off the left. Trying to hit a low bullet 4-iron that kind of would pitch kind of between 10, maybe 15 on, and that’s exactly where it did and, yeah, it was scary.

On his hot start

QUESTION: It came close. Talk about the round, because you got here early this morning, it was cold and breezy. You got off to a pretty hot start?

FOWLER: I got lucky on the 1st hole. Plugged it in the fairway on 10. Cleaned the ball and drop. I got the round going from there. I didn’t exactly agree with the ball being down today. I was fortunate to take advantage of the par 3’s when we did have a clean golf ball and managed my way around with mud as well as everyone did. Everyone was in the same situation. Definitely pleased with the way I played. Like I said, managing what we had to deal with and made some good putts to turn in 31. Making a good par save on 18, and then to go get a couple more on my back-9, the front-9. Definitely a nice start to a solid day.

On his game, at the moment

QUESTION: You’re a young guy in great shape. You seem energized. Got a little bounce in your step. Game must be in a really good spot.

FOWLER: It is. Lot of good stuff going on right now. Family is great, you know, friends, everyone. Work I’ve been putting in in the gym, my trainer is doing it, and spending time with Butch the first two days here this week on Monday and Tuesday, Jimmy and I were able to hang out and play golf, play some matches, get some good work. Yeah, really like where I’m at right now.

On the golf course

QUESTION: Most of the day I was up here following Jon Rahm and Phil Mickelson, but there was a guy right behind us that was in the feature group coverage. Rickie, the golf course was gettable this morning, huh?

FOWLER: Kind of. I was fortunate enough to take advantage of the par 3s, played them 3-under, and managed my way around nicely with mud balls all day as everyone else did. Yes, the golf course was gettable but tough when you’re playing in those kinds of conditions with mud balls. Not as much when you have wedges in your hands, but once you get some longer shots, longer irons to potentially woods going for par-5s in 2, it becomes a bit dicey. I was — got fortunate on No. 10, my first hole the ball plugged in the fairway and was able to pick it up and clean it and start off with a nice birdie. Like I said, took advantage of the par-3s and was able to manage my way around.

QUESTION: Talk to us about the mud balls. Lot of players have encountered that. What’s your strategy with how you play when you see mud is on the ball?

FOWLER: So I mean most of the time it goes the opposite way of the mud, most of the time. Then you’re out here at a place where there’s definitely some water in play, some hazards, and you don’t want to short side yourself at anytime, so you’re trying to kind of guard away from putting yourself in a bad position. I felt like I got some good breaks with having mud on the same side as sometimes where the trouble was and that I could kind of keep it fairly conservative. If the mud was kind of kicking in, it ended up being a good shot. There was a couple of them away from the hole and kind of had to play and take that when water is in play. You have to manage your way around nicely with that. Shooting 31 going out definitely helps. I was able to kind of just keep going, make a couple more, and the 2 at the last on 9 was a bonus.

QUESTION: You didn’t play last week. You decided to put Houston back on your schedule. Fairly decent-sized tournament next week. Your thinking this week.

FOWLER: I mean, the reason last week that I wanted to be off, get some down-time rest, spend time with friends, I just don’t play four in a, row and Bay Hill is a place that I like to play. Unfortunately, I had to miss it last year, but I wasn’t going to miss it this year. It’s a place where I’ve had success. I won a junior tournament there and played well as a pro to get a decent finish there. I was also happy about that. I made some little mistakes in a place like that where it’s fine line and water can creep in at times. So, nice to have the week off to kind of relax, recharge a bit, and I love playing here. I like playing my way in the Majors and they’ve been able to do a great job here with just conditions around the greens and making it similar as — as similar as possible to next week. Like I said, just playing and going through the process and getting ready, makes things a lot easier when you go tee it up Thursday next week.

QUESTION: Off to a great start.

On first pitch at Astros game

QUESTION: Rickie, what are you doing to prep for the big moment throwing out the first pitch?

QUESTION: Rickie, the strong start and how it set you up?

FOWLER: It was nice. I was able to birdie my first hole, No. 10, and I think I got 4 of my first 5, I believe. So hit some good shots, made a couple good putts. I think the big thing for me, I took advantage of the par-3s when I did get a clean golf ball. That was key. To manage my way around — everyone had to basically play with mud balls pretty much all morning, and it’s going to be the same I’m assuming this afternoon. Just trying to stay away from making mistakes and getting in bad positions, because water is definitely in play on a lot of holes. You don’t want to be short sided. That’s where I feel like my caddy, Joe, and I did a good job of managing our way around.

On jump from Honda

QUESTION: Do you feel like you made a jump with the win at Honda you’ve been able to sustain or do you feel —

FOWLER: It’s definitely been trending and building this way. I felt very good the last few months. Definitely playing in Phoenix and playing well there, got a good Sunday and that kind of set-up two weeks off to go prepare and get ready for Honda, and it’s been great. I’ve had a lot of confidence in the swing and the game. Kind of continue to tighten it up.

I was talking about earlier, I got some great work in with Butch Monday, Tuesday, he was down. Jimmy and I spent time with him both days pretty much all day over at Lochinvar, and really when you get that kind of one-on-one time, especially going out and playing on a golf course and just kind of going through and trying to simulate actual tournament rounds, it’s very beneficial.

So, very happy that we’re able to do that and nice to kind of see that payoff with the start today.