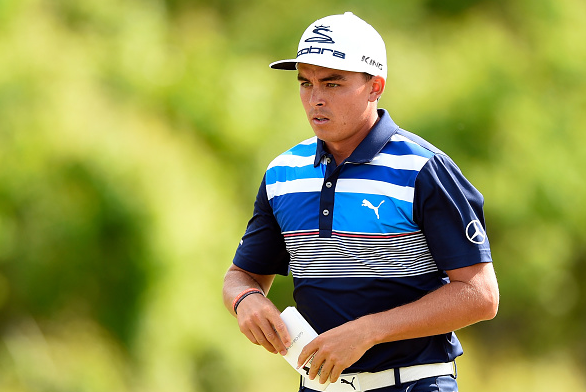 Rickie Fowler heads into Sunday’s final round only three back of little known Sung Kang. The 28-year-old Fowler will play in the final pairing with the 29-year-old Kang on Sunday.

Given that Fowler is ranked No 9 in the world, and Kang checks in at 202, many are predicting that Fowler will pull off the comeback.

Following his third round 5-under 67, which ended with two ugly holes on 17 and 18, Fowler met with the media for his obligatory press conference.

QUESTION: Rickie, I won’t focus on last couple of holes. I want to focus on how well you hit it today. Tee to green today with this wind the ball-striking was spectacular.

FOWLER: It was great. You can’t really dwell on last two holes. I mean, we went out and played some good golf today, Joe and I just managed our way around very well. Hit a lot of our lines and a lot of good shots and made good putts.

Yeah, just got funky on the greens last two holes. Was trying to avoid a spike mark on 17 and the putt, my second putt for par on 18 supposed to go right and I started it inside left and it moved left on me. Whether that was wind or something on the green.

So, yeah, unfortunate, but we put ourself in a position to win. We’ve done all the work these last three days to be in the position we’re in right now and put that behind us and 18 holes of golf left.

Thoughts On Position Going Into Sunday

QUESTION: That position 7 back at the beginning of the day, looks like 3 back entering tomorrow.

FOWLER: We moved in the right direction. Yeah, it would be nice to be tied, in the lead or closer to have a smaller deficit, but like I said, we’re in a position to win a golf tournament.

QUESTION: You’ve come from behind before to win on the PGA TOUR. You’ll be with a guy who has never won. What does that give you mentally going into around like tomorrow?

FOWLER: You know, I mean, being nervous out there, going in the final round of a golf tournament. It’s fun. It’s time to battle. He’s out front a bit. I got a little cushion where 3rd is. Few guys up there. Someone could throw a low round in there and get in the mix. It’s down to a few guys. If we go play good golf, it will be nice to get off to a good start and put some pressure on him. I’ve got a lot of work to do to get the job done. He’s been playing well all week. Be tough to catch if I don’t go out and make some birdies. So, take care of our job and see what happens.

QUESTION: What was working for you the first 16 holes?

FOWLER: Little bit of everything. Drove it well, hit a lot of fairways and greens. Made some good putts. Really not to look at the last two holes. It was a great day of golf. I put myself in a position to go win a golf tournament tomorrow, so we go get some rest, sleep, and there’s 18 holes in front of us to go play. Like I said, to focus on winning the golf tournament. Three days behind us and let’s go have some fun.

Being In Final Group

QUESTION: There’s a spot next to Kang in the final group tomorrow. Make things any easier or change your mentality trying to track him down?

FOWLER: It will be a Match Play situation. I’m starting the day 3 back and it’s going to be fun. I like the challenge of coming from behind and then potentially being able to put pressure on the guy. The thing is I have to get off to a nice start. I have to go out and not make mistakes early. I don’t want to go out and make any bogies. I want to go out there and, if anything, depending on what the weather is, but make some birdies early because being behind, it doesn’t really give you that position or the cushion to make any mistakes.

Sung out front, he’s got a little pit of that cushion, he can, I guess, afford to have a bogey in there, whatnot, because I still have to go out and catch him.

QUESTION: What was the target in terms of trying to, hey, let’s cut it in half and get as close? How do you approach it when you’re that far back?

FOWLER: Really, I couldn’t focus on what he was going to do or anything. He could go on play well, shoot a few under. Really anything under par out there today was a good score, and, you know, it would have been nice to finish off what I had going, and it was really just go out, keep pushing and try and get as much out of it and wherever that put me after 18 holes, deal with it. If that was tied for the lead or 1 back, and right now we’re 3 back, I think. We’re good to go. It will be fun tomorrow.

On All Those Birdies

QUESTION: 22 birdies through 3 rounds, the most you’ve ever had on the PGA TOUR. How much can that help you, that mindset, when you need 4, 5, 6, 7 more tomorrow?

FOWLER: We have 22. We’ll try to get 30. We’ll see what we can do. It’s good to see the amount of offense this week, same thing at Bay Hill. I’ve been able to limit the amount of mistakes that I had at Bay Hill and turn that into a little bit more of a positive this week. So definitely heading in the right direction. The work we put in earlier this week has been definitely beneficial and the amount of birdies, that’s something that’s going to be needed around the golf course next week. Yeah, I’m happy where we’re at.

Driver Off The Deck

QUESTION: The driver off the deck on 15, did that just show how much you were feeling it out there?

FOWLER: Not necessarily. I love that shot. Perfect condition with the wind in out of the right. I just came up and out of it a little bit. I was trying to start it up the left with a little cut and it was actually the right play to where that pin was front right. If I hit the shot I want to, I’m down there with a 40-yard pitch up the hill into the wind versus trying to kind of hold a wedge to that front right pin, which a good shot there might be 10, 15 feet where I could hit a chip up there close. Yeah, just kind of came out of it.

QUESTION: You mentioned the wind. Was that a factor on 17 and 18 and on your putt?

FOWLER: 17 I had a spike mark and the putt broke more than I thought it would. 18 I’m not sure if it was wind or what it did. The second putt, my par putt, it’s supposed to go right. I started it inside left. I thought I hit a great putt. As soon as I looked up, it was just kind of sliding just a touch left and yeah, it’s not supposed to do that. I hit the putt where I wanted to and a bit unfortunate. Like I said, not to think about the last two holes. Three days we’re in a position where we’re at right now, and 18 holes of golf tomorrow or whether that’s Monday, we’ll go see if we can get another trophy.

On Final Few Holes All Week

QUESTION: The last few holes have been a bit of an Achilles Heel this week through the first three rounds. Do you feel like there’s a simular issue there?

FOWLER: Not really. I’ve actually had some — the wind has been a nice spot for me. I kind of came out of a couple, but no, I’m getting my bad shots out of the way. We’ll be good for tomorrow.