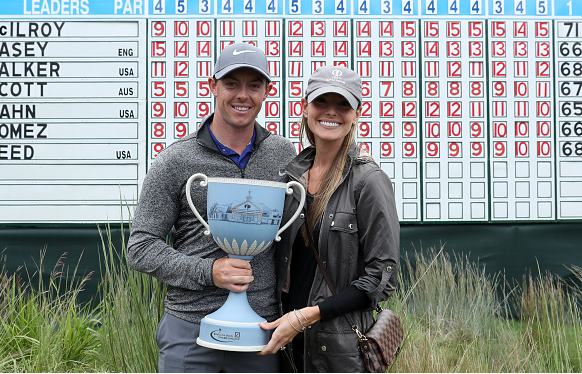 Going into a final round of the Deutsche Bank Championship at TPC Boston where severe weather alerts pushed tee times significantly ahead, the thinking was that Paul Casey had a significant advantage on the field. He held a three stroke lead, and growing up in England, Casey has plenty of experience in the kind of torrential conditions they would be facing.

As it turns out, the golfer everyone should have been looking out for was somebody from that region of the world. But it was not Paul Casey, it was Northern Ireland’s Rory McIlroy.

In what has been considered a down year for the supremely talented Irishman, McIlroy finally has his first PGA Tour win of the 2015-16 season, shooting a Monday-low round of 65 and coming back from six strokes down to finish two ahead of the floundering Casey.

Casey, who had shot three 66s to get into the 54-hole lead, couldn’t find his form on Monday, shooting a disappointing 73 and taking solo second.

How Rory Did It

McIlroy and Adam Scott shared low round honors of the day, with final round 65s. In round 1, McIlroy got off to a terrible start with a triple-bogey on his third hole to drop to +4 early.

He rebounded to finish even par, and then went low in rounds 2 and 3 with a 67 and 66 respectively. He was six behind Casey to start round 4, but had a sizzling front nine five-under 31 which included five birdies, and then kept his play solid down the stretch, and birdied 18 to land the clubhouse lead.

Casey had a 60 foot eagle putt on 18, a day after he did eagle that hole, but could not convert, and McIlroy had his win. Rory had been struggling on the greens all season, but after making a few significant changes, including hiring a new putting coach and ditching his Nike putter for a Scotty Cameron mallet, he looked like the Rory of old, finishing 7th in the field in strokes gained: putting, and first in putts per GIR.

What This Means For Rory

With this victory, Rory, who also won the 2012 edition of this event, moves from #38 in the FedEx Cup standings to #4. That locks up his spot in the field for The Tour Championship at East Lake in Atlanta in three weeks. If he can stay in that top six going into East Lake, a win will give him the FedEx Cup, and the $10 million that comes with it.

The win also adds some legitimacy to a largely forgettable PGA Tour season for Rory. McIlroy had been irrelevant in the major season (he was T5 at The Open, but finished well back of the Stenson/Mickelson duo) including missed cuts at both the U.S. Open and PGA Championship. His best finish going into TPC Boston was a T3 at the WGC Cadillac Championship.

With the win, Spieth leapfrogs Jordan Spieth and Henrik Stenson in the world rankings, going from fifth to third.

The top 70 in the FedEx Cup standings after today’s final round will move onto the BMW Championship at Crooked Stick on Thursday. Six players who were outside the top 70 to start the week will be moving on: Billy Hurley III (77th to 51st), David Hearn (92nd to 59th), Hudson Swafford (82nd to 61st), Vaughn Taylor (79th to 64th), and Marc Leishman (71st to 70th).

To make room for those six, Ricky Barnes, Jerry Kelly, Martin Laird, Johnson Wagner, Colt Knost, and Chez Reavie, who were all in that top 70 to begin the week, have been eliminated.

With Davis Love III’s four Captain’s picks coming over the next few weeks (3 after the BMW, and 1 after the Tour Championship), it is important for those who failed to qualify automatically to play well in these playoffs.

The golfer who hurt himself most in that regard was Jim Furyk. Furyk, who was well back in the FedEx Cup standings after missing three months of the season with a wrist injury, had a poor week at TPC Boston and has now been eliminated from the playoffs. He will have to hope that his quality play since his injury return speaks for itself enough to get one of those spots.

All the other main candidates for those picks: J.B. Holmes, Rickie Fowler, Matt Kuchar, and Bubba Watson will all be at the BMW.

“If you had said to me after three holes on Friday that I would be sitting here, addressing you guys as winner of this tournament, I would have told you to go somewhere, I think. It’s incredible in this game, how quickly things can change, how quickly things can turn around. It has been a great lesson for me this week, in not to get down on myself, how to stay patient.”
–Rory McIlroy, Deutsche Bank Champion.