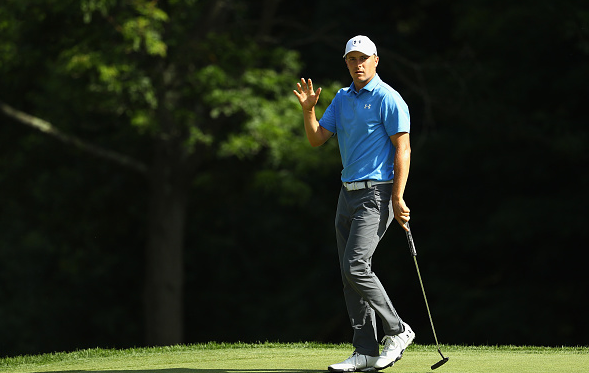 In his first-ever tournament round at TPC River Highlands, Jordan Spieth fired a 7-under 63 and leads the Travelers Championship by one stroke.

The two-time major champion started his inaugural round red-hot with birdies on three of the first four holes, and five of the first eight, getting to 5-under through 8 holes.

A bogey to close the front-nine was the only blemish on the day for the young Texan, who cruised to a bogey-free final-nine, highlighted by a birdie on 18.

“Being 3 under through four it helps you walk a little easier, it helps kind of the shots you are playing throughout the round,” said the 23-year-old Spieth. “You don’t feel like you have to take as many chances and I was able to play away from pins when I was in a little bit of trouble.”

One back, tied for second at 6-under 64, is Johnson Wagner and Connecticut native Brett Stegmaier, who grew up just 25 miles from the course.

Despite a nightmarish season (13 missed-cuts in 20 starts), the 33-year-old Stegmaier is happy to be home, and feels his game is coming together.

“It feels great. It’s been a rough year obviously,” said Stegmaier. “Just nice to take another step in the right direction. It’s been coming together the last couple months even though the results haven’t really shown it. To shoot a really low round is a big confidence boost.

Graham DeLaet and Troy Merritt are tied for fourth at 5-under, and round out the top 5.

Rory McIlroy posted a 3-under 67 in his debut at TPC River Highlands. Afterwards, McIlroy, frustrated with his 30-putt performance, said he’s giving his new Taylormade putter one more week to turn things around.

“I made a decision this week I would give it one more week and see how it performed,” said McIlroy. “It’s nothing to do with the putter. It’s mostly what I’m doing with it.”

Jim Furyk, who shot a 58 in his last round at the Travelers, was nine shots off that record-setting score, posting a 3-under 67.

World No. 4 Jason Day, who missed the cut at Erin Hills, continued his struggles in Connecticut, posting a 2-over 72. Defending champion Russell Knox shot 1-under 69.

“I got off to a beautiful start on 1 and 2, knocking a putt in and hitting it really tight there. Felt good. Felt like a golf course we could take advantage of. Just tried to keep the ball in the fairway, and from there, you have short enough clubs into the green to where your misses can still be putts.”
–Jordan Spieth, Round One Leader