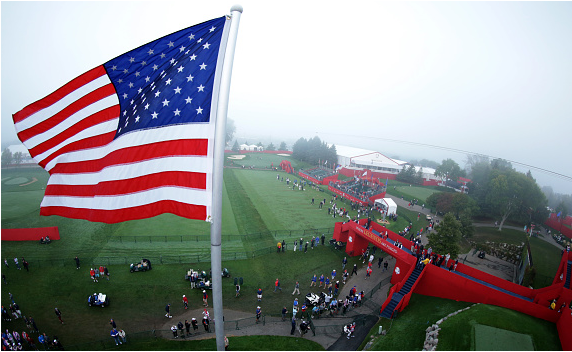 Today, the spotlight of golf shines on Chaska, Minnesota for the 2016 Ryder Cup. It is the greatest display of national pride in the golf world. Twelve of the best Americans, and twelve of the best Europeans in the world are looking to bring honor to their home countries.

In today’s PGW Daily, we mostly look at the Ryder Cup, but also look at Asia, where the LPGA is in action this week.

And They Are Off!

Olympic gold medalist Justin Rose hit the first tee shot, and we are off and running at the Ryder Cup! The U.S. has not won this event since 2008, but are favored by most to be victorious on their home soil this week. Rose is playing with Open Champion and Olympic silver medalist Henrik Stenson. Their opponents are the American powerhouse team of Jordan Spieth and Patrick Reed.

Justin Rose hits the first shot of the #RyderCup https://t.co/FFXJdDvqi7

Picture(s) of the Day

The European Ryder Cup team did some team-building before play starts.

Foursomes: Foursomes are an alternating shot format. Two balls are being played on each hole, one for both teams. One player hits the tee shot, then his teammate hits the next shot, switching until the ball is in the hole. Players also alternate who plays the tee shot on each hole.

Four-ball: In four-ball, there are four balls being played on each hole. Everyone plays their own ball and the lowest score for each team is compared to the other team’s. The lowest score from there wins the hole.

People asking about Foursomes. Toughest format by far. Drive partners ball so he has for iron play. Try not to leave him 6 feet coming back!

Fan of the Week

In yesterday’s practice round, a heckler was annoying European Ryder Cup members about a 12-foot putt they kept missing. Henrik Stenson calls the fan out to try the putt himself, with Justin Rose even putting down $100 on it.

Moments later, the man sunk the putt and was $100 richer. It was the best fan involvement in recent golf memory.

American LPGA star Lexi Thompson, who passed on the Reignwood LPGA Classic in Beijing, is still working hard back at home. This is an unusual exercise the works the hamstrings.

Some hamstring work! This exercise kills me , but it's a really good one. Try this one out next time in the gym and try to go as slow as u can on the way down to the bosu ball. 👍🏻#stillbreathing

Thompson is the longest hitter on the LPGA Tour, so she likely knows what she is doing with these workouts.

The LPGA is in Asia for the next few weeks. This first tournament, the Reignwood Classic is taking place in Beijing. Ariya Jutanugarn, maybe the hottest golfer in the world over the past six months, held another first round lead. Round 2 was much tougher for her though, as her 3-over 75 was ten strokes worse than her 65 in round 1.

It has been a tremendous tournament so far for Henderson, the 18-year-old Canadian who is ranked #4 in the world. She has been in a slump the past three months, after her breakthrough major victory at the KPMG Women’s PGA Championship and her victory at the Cambia Portland Classic. A T9 last week was her first top 10 since Portland.

Shanshan Feng, from China, has a lot of local support. She was the bronze medalist at the Olympic Games in Rio.

Awkward Shot of the Day

Phil Mickelson, the world’s most famous left-handed golfer, ended up having to flip his club so that he could get a shot from the stands early in his match. He, and playing partner Rickie Fowler, had to concede the hole, and are down early.

The shot occurred when Fowler hit a poor drive way off to the right.

The patrons are loud and excited at the first tee of the Ryder Cup:

Being in Minnesota, it makes sense that the Americans would have a larger following at this event, but the European fans are also making themselves heard.