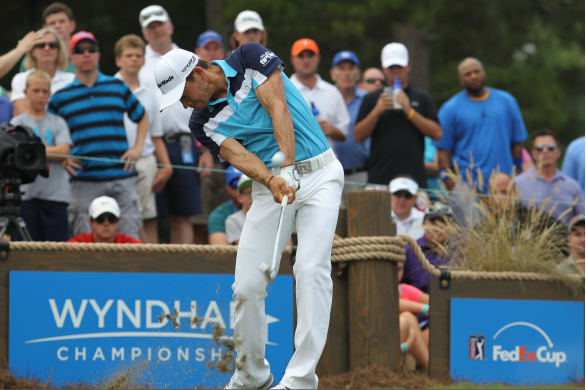 This might be the week of the year where the average Joe envies professional golfers the least. The pluses of being a PGA Tour member are well acknowledged: fame, travel to exotic locations, enormous paychecks and the many benefits that come from receiving enormous paychecks, etc.

For a large portion of the PGA Tour, however, this week is all business. This week’s tournament is the Wyndham Championship, the last tournament of the regular season. Guys like Ryan Moore and Rafa Cabrera-Bello might be able to sleep this week with all their exemptions, but nearly everyone else, and especially the Bronson Burgoons, the Tim Wilkinsons, and the Camilo Villegases of the tour are going to be fighting intense pressure.

The FedEx Cup playoffs start in one week, meaning this is the last chance for golfers to get into that top 125. Those top 125 will get to play in the lucrative FedEx Cup playoffs and know they will have their tour card for next season. Those who miss out will need to find another way to get back here next year.

Not only do those on the FedEx bubble have to push past all trepidation and finish highly, but they need to find a way to do it in a tournament with a strong field. Imagine a golfer needing a third place finish to keep their card.

Then imagine that same golfer needing a third place finish in a field that includes Jimmy Walker, whose last event was a major victory, and Jim Furyk, whose last action was shooting a freakin’ 58! The pressure will be intense and palpable. Golfers will be clawing and scratching, doing anything they have to do to get up this leaderboard.

The origins of the Wyndham Championship can be traced back to 1938. It was originally known as the Greater Greensboro Open. It has been held at several different courses, now permanently at Sedgefield Country Club, but never outside of the Greensboro, North Carolina area.

The inaugural Greater Greensboro Open which was held at both Sedgefield and Starmount Forest Country Club, was won by the legendary Sam Snead. Snead would go on to win the tournament seven more times in his illustrious career. Winners have also included Ben Hogan, Byron Nelson, Seve Ballesteros, Billy Casper, Gary Player, and Raymond Floyd.

The defending champion is Davis Love III. His final round 64 gave him a one-stroke victory over Jason Gore, and two stokes over Charl Schwartzel, Paul Casey, and Scott Brown. With the victory, the 51-year-old Love became the third oldest winner of a PGA event in PGA history.

Unfortunately, Love III will not be defending his title in Greensboro. He is recovering from hip surgery and has shifted his entire focus to his Ryder Cup Captain duties.

The 2015 Wyndham Championship was also notable for being the last tournament to include Tiger Woods. It was something of a tease for those on both sides of the Tiger debate. Those who are convinced that Tiger will become great again can point to the fact that he was the 36-hole co-leader and played in the last group on Sunday. Those who think his best days are long gone can point to his final round 70, where he played himself out of contention with a triple bogey on 11. Tiger began the final day in second place, but finished in a tie for 10th.

Highlighted earlier, the season long chase to qualify for the FedEx Cup playoffs ends this week. Those in the top 125 will play at The Barclays, the first playoff event; an event with an $8.5 million dollar purse that awards 2000 FedEx Cup points. And the events only get better from there.

Nearly the entire FedEx Cup bubble will be at Greensboro. Just one shot can be the difference between making the playoffs and sitting at home. Ask Morgan Hoffman, whose missed two-foot putt on 18 at the John Deere Classic dropped him from projected 123rd to current 131st. His job for this week got much more difficult.

Here are a number of those bubble players who will be at Sedgefield, with current ranking:

It’s not just the bubble guys who care about FedEx cup points this week. With each round of the playoffs, a set number of players will not qualify for the following week. That means even somebody like Martin Laird, who at 88th is a lock for the Barclays, will be anxious to pick up more points and improve his chances of getting further in the playoffs.

Jon Rahm is a special case. The 21-year-old star is playing on a special temporary membership, and needs to win an event for his points to count. It is difficult, but it has been done before. Jordan Spieth did it in 2013 and ended up finishing 7th in the final FedEx Cup standings.

The Ryder Cup is much more exclusive than the FedEx Cup playoffs, and several players in the field will be fighting for those hopes. The top 8 in Ryder Cup points qualify automatically, with U.S. Captain Davis Love III getting four captain picks, making a 12-player team.

One of those players on the Ryder Cup bubble is Rickie Fowler, who originally was not planning to play the Wyndham, but changed his stance with the Ryder Cup in mind. He currently ranks 12th in the Ryder Cup standings. Fowler stands an excellent chance of being a Captain’s pick if he does not qualify through points, but with so many greats in the mix, it is definitely not something he can take for granted.

We are just over two weeks removed from Jimmy Walker’s wire-to-wire victory at the PGA Championship, his first career major victory. Walker then took a much deserved two week break, making the Wyndham his first tournament as a major winner.

Walker turned pro in 2001, and took a notably long time to notch his first career PGA victory, falling short 188 times before he won the 2013 Frys.com Open. He won again five events later, and then again just two tournaments later, which made three victories in 8 events. He has won six times over the past three years.

Now that Walker finally has a major championship on his resume, who knows what heights he might reach? If he follows his previous trend, the PGA Tour should watch out, including the field at this week’s tournament.

Jimmy Walker is not the only man in the field who did something special in his last start. The last time we saw Jim Furyk, he shot an unbelievable final-round 58 at The Travelers Championship, the single lowest round of the million-and-a-half plus rounds of golf that have been played in PGA Tour history. He has set a bar that will be nearly impossible to reach. While nobody is expecting another 58, he is now going to be watched in a whole new light.

Furyk has basically only played two great rounds this season. Those two just happened to be spectacular: a final-round 66 at the U.S. Open to finish T2, and the 58. The rest of his season has been a disappointment; he missed three months after wrist surgery, and has not played well in most of his starts since. We have seen Furyk at both ends of the spectrum this season. Which Furyk will show up at Sedgefield? He definitely is not coming in under the radar.

Wesley Bryan – Bryan, known by many for his trick shot videos on Youtube, was granted immediate PGA membership less than two weeks ago when he won his third Web.com event of the year. He is already making the most of his opportunity, going 66-64 in the first two rounds of the John Deere Classic, his first event as a member, on his way to a T8.

Ryan Moore – The winner of last week’s John Deere Classic, Moore is rounding into form at the right time, and wants to keep that momentum going into the playoffs. With the win, he ascended to 50th in the world rankings.

Tyrrell Hatton – Hatton, a young Englishman, posted top 10s in both majors (Open Championship, PGA Championship) he entered in 2016. He is currently 8th on the European Tour’s Race to Dubai standings.

Hideki Matsuyama – Matsuyama, the world’s 20th ranked golfer, was T4 at the PGA Championship, his last start. He also finished T7 at both The Masters and The Players, and won the Waste Management Phoenix Open.

Shane Lowry – It has been a struggle for Lowry since he blew a four-shot lead going into the final round of the U.S. Open. His last four starts have ended with a T36 and three missed cuts.