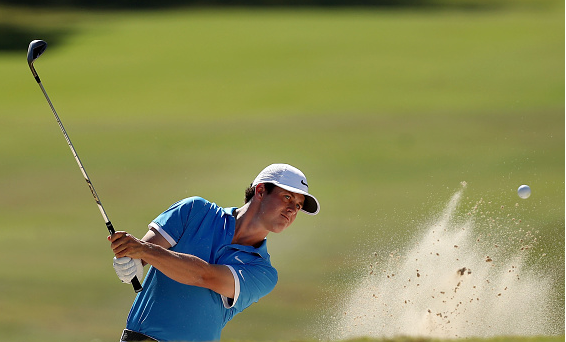 Cody Gribble won his first PGA Tour event in only his second start as a rookie, while Hideki Matsuyami lapped the field in China at the WGC-HSBC Champions – grabbing his 3rd title at the age of 24.

While Gribble and Matsuyami won big league, so did their primary sponsors – Nike and Srixon, respectively.

As is done in this space, we like to measure the weekend winners of the branding war on Tour.

In Mississippi, at the Sanderson Farms Championship, Gribble pulled away from the field during the mid-point of his final nine – eventually winning by 4 shots. And so without any real drama to cover, the focus down the stretch for the Golf Channel was the human interest angle of Nike’s Gribble.

And in Shanghai, at the WGC-HSBC Champions event, Matsuyami did the same thing, but even sooner and by a greater margin (7 strokes). So for almost the entire round, the cameras were all over the Srixon’s young Japanese star.

Afterwards, as is customary, the tournament champion is captured holding the trophy, while wearing his sponsor’s logo.

In this photo by Sam Greenwood of Getty, Nike is given prime time exposure (3 logos), along with the champ… and the chicken.

Ross Kinnaird captures Matsuyami with his big, beautiful WGC trophy, along with the Srixon logo on Hideki’s hat and shirt.