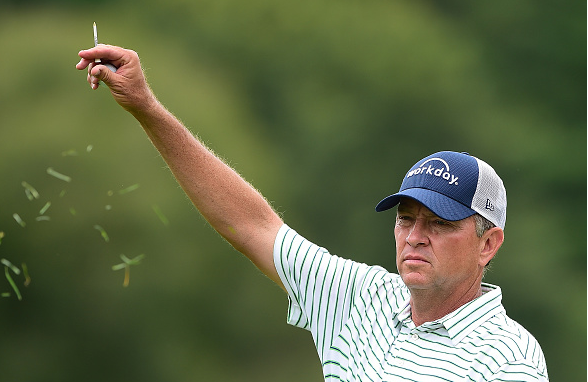 Davis Love III, a 53-year-old Hall of Fame inductee, has struggled badly on the PGA Tour in 2017. In seven events this season, Love III has a T41 a T61 and five missed cuts, forgivable considering his age, but still unquestionably disappointing for the former Ryder Cup Captain.

In the first round of the Greenbrier Classic, however, Love III looked decades younger, shooting a bogey-free 7-under 63, and is just one stroke out of the lead after 18 holes in White Sulphur Springs, West Virginia.

One of the big storylines this week is the inclusion of both Davis Love III, and is son Davis Love IV, who goes by the name ‘Dru’.

This is the first time they have both been in a tournament field where DL3 was not a tournament host. In round one, father destroyed son, as a bogey, bogey, double-bogey finish lead to a 4-over 74 finish for DL4, 11 strokes behind his father.

“I’ve been working really hard the last couple weeks on trying to fix my swing to kind of swing around a stiff back and stiff hip. I put a lot of time into hitting balls and trying to get back to hitting it solid. I’ve given up on hitting it a long way. I’m just saying, ‘I’ve just got to hit it straight.’ This is a perfect golf course for me.”
–Davis Love III