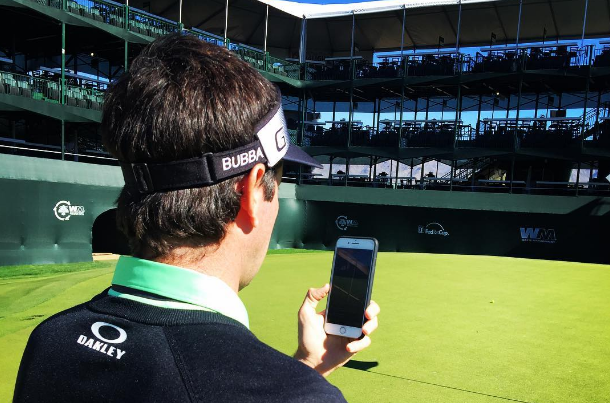 Bubba Watson is in Arizona this week for the Waste Management Phoenix Open. And Bubba wastes (pun intended) no time in promoting the event that he sort of trashed (pun intended) last season.

In this clip, Bubba provides his Facebook fans with a neat behind-the-scenes look at the iconic 16th stadium hole at TPC Scottsdale.

Bubba also gave the Facebook promo a nice plug on his Instagram channel – with a premium shout-out to his sponsors Oakley and Volvik as well.

Playing 16 is a lot quieter this week! See my livestream on Facebook… #WorstBall

In case you think this is just Bubba waltzing up to the 16th hole during a practice round, and pulling it out his iphone… that’s where you’re wrong, kiddo.

This promo is clearly a joint marketing effort between Bubba’s digital team and the managers of the Phoenix event, as part of an all-out apology/promotional tour.

As Bubba slyly states in the video (and not by accident), “No one likes to get booed” coming out of the 16th hole’s tunnel. Wink, wink. Hint hint.

To close, here’s Bubba’s latest plug of the Phoenix event.

The best thing about the @WMPhoenixOpen ProAm this year? Playing with THIS GUY! @markwahlberg